This association, risen among the neighbours of Garray (Soria) - town located at the feet of Numantia and heir of its rich patrimony expects, through the historic reconstruction, to establish a connection between the scientific work of archaeologists and its didactic presentation. To carry out these historic reconstructions with the necessary scientific rigour, this association relies on the advice of the archaeological team of Numantia basing its principle activities on the presentation of way of life of Celtiberian and Roman world as faced and complementary but essential elements to understand the Numantian and Celtiberian history that becomes reality in the following year events. 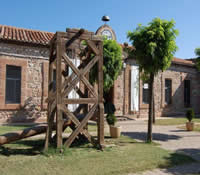